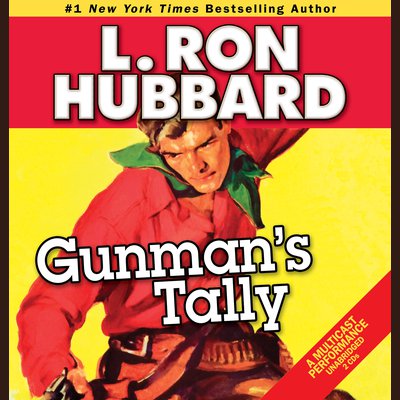 Series: Stories from the Golden Age

Easy Bill Gates is as quick with a smile and as slow to anger as Gary Cooper in High Noon. He’s a model of restraint . . . until he’s forced to strap on a holster and kill the man who murdered his brother. Now a ruthless land baron is out to grab Bill’s ranch and he’s hired a gang of gunslingers to get Bill out of the way. Easy Bill will have to make some hard choices—and fast draws—to save his land and his life. A saloon piano comes to life and a Colt .45 shoots to kill as the audio version of Gunman’s Tally puts you in the middle of a range war. Hailing from the western states of Nebraska, Oklahoma and Montana, Hubbard grew up surrounded by grizzled frontiersmen and leather-tough cowboys, counting a Native American medicine man as one of his closest friends. When he chose to write stories of the Old West, Hubbard didn’t have to go far to do his research, drawing on his own memories of a youth steeped in the life and legends of the American frontier. Also includes the Western adventure, Ruin at Rio Piedras, the story of a young cowboy kicked off a ranch for falling in love with the owner’s daughter . . . only to devise a whip-smart plan to win the day—and the girl.