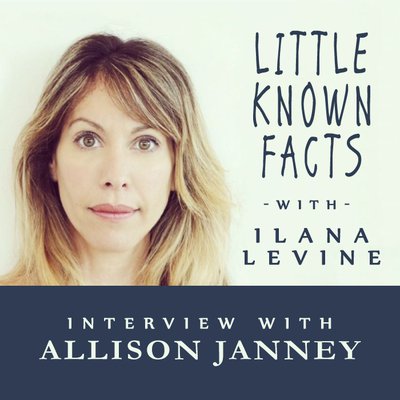 Allison Janney, a seven-time Primetime Emmy Award winner, had dreams of becoming an Olympic figure skater. That dream ended when, at age 17, she ran through a sliding glass window. The injury was serious, and, suddenly Allison's future goals shifted. She found herself at Kenyon College and she became a theater major. While at Kenyon Allison was discovered by Paul Newman and Joanne Woodward who had come to the college to direct a play at their alma mater. They encouraged Janney to go to NYC and pursue a career in acting professionally. What happened after that is the subject of this funny and intimate conversation with host Ilana Levine, a dear friend of Allison's. The two met and became fast friends when Ilana was starring in the HBO series "Tanner 88" with a mutual friend. Allison walks us through her audition for "The West Wing" and opens up about why the recent loss of her brother makes starring on the CBS hit show "Mom" all the more important for her during this emotional time.
The incredibly versatile Allison Janney has taken her place among a select group of actors who combine a leading lady’s profile with a character actor’s art of performance. Currently starring alongside Anna Faris in the CBS/Chuck Lorre sitcom, “Mom,” Janney also received rave reviews for her turn as ‘Margaret Scully’ on Showtime’s groundbreaking drama “Masters of Sex.” Janney won Emmys for both roles in the same year; a rare feat in Emmy history. She won a second Emmy for “Mom” the following year, bringing her total number of ATAS statues to seven. She was also recently honored with a star on the Hollywood Walk of Fame. In addition, Janney has continually taken on movie roles during her hiatus weeks from the sitcom. She’s completed filming “I, Tonya” with Margot Robbie for Miramax Films. Janney also appeared in two of the previous summer’s biggest box office titles: the adorably animated “Minions” and “Spy” with Melissa McCarthy. Prior feature work includes “The Duff,” Jason Bateman’s directorial debut “Bad Words,” the Dreamworks’ animated film “Mr. Peabody & Sherman,” and “The Way, Way Back” with Steve Carell and Toni Collette. Additionally she co-starred in the much anticipated feature film "The Help" based on the best-selling novel of the same name, winning the Ensemble awards from the Screen Actors Guild, National Board of Review and the Broadcast Film Critics. For her role in Todd Solondz's film "Life During Wartime" she was nominated for Best Supporting Actress by the Spirit Awards. She received another Spirit Award nomination for her work in the independent feature “Our Very Own,” and starred opposite Meryl Streep in “The Hours,” which received a SAG Award nomination for Outstanding Ensemble Cast in a Motion Picture. Other feature credits include the Academy Award winning film “American Beauty” (for which she won a SAG Award for Outstanding Ensemble Cast in a Motion Picture) as well as “Nurse Betty,” “How to Deal,” “Drop Dead Gorgeous,” “10 Things I Hate About You,” “Primary Colors,” “The Ice Storm,” “Six Days Seven Nights,” “The Object of My Affection,” and “Big Night.” On TV, she is renowned for her starring role in the acclaimed NBC series "The West Wing," where she won a remarkable four Emmy Awards and four SAG Awards for her portrayal of White House Press Secretary ‘CJ Cregg.’ She made her Broadway debut in Noel Coward’s “Present Laughter” for which she earned the Outer Critics Circle Award and Clarence Derwent Award. She also appeared in Arthur Miller’s "A View from the Bridge," receiving her first Tony Award nomination and winning the Outer Critics Circle Award as well as the musical "9 to 5," Janney made her return to Broadway earlier this year in the revival of John Guare’s “Six Degrees of Separation."