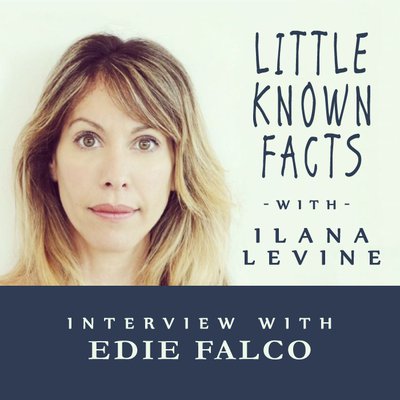 Edie Falco, the multi award winning actress, takes Ilana through her life and career in exquisite detail. From her early days waitressing to her early indie films. How she got the role of Carmela on "The Sopranos," the script she originally read for "Nurse Jackie." Ilana and Edie talk about sobriety, adoption, fame, single motherhood, pet psychics, and much more on this fascinating episode of "Little Known Facts."

Edie Falco's acting career began with her work in indie films: The Unbelievable Truth , Laws of Gravity and Trust. In 1999, she had two starring roles, in Judy Berlin and Random Hearts, her first major role in a mainstream film. She was cast in roles on the television shows Homicide, Life On The Street and Oz both created by Tom Fontana. She became a household name when she landed her star-making role as Mafia wife Carmela in HBO's The Sopranos. When that show ended, she nabbed the title role in Showtime's Nurse Jackie and then she played Louis C.K.'s sister on Horace and Pete. She will also portray attorney Leslie Abramson, the attorney best known for her legal defense of Erik Menendez in the mini series Law and Order : True Crime. Raised on Long Island Edie now lives in New York City with her children and is an advocate for animal rights.

Little Known Fact: She auditioned and got the role of Carmela Soprano all within 24 hours.