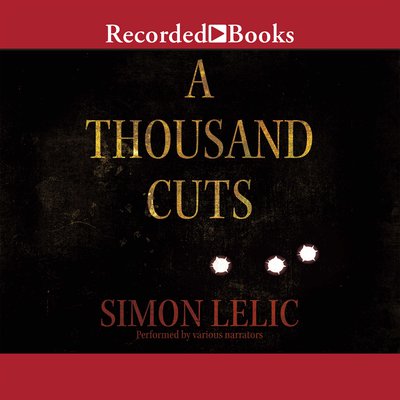 A former journalist, Simon Lelic caused quite a buzz in the literary world with his stunning debut. A Thousand Cuts is a mesmerizing novel that explores the horrifying consequences of discrimination and bullying.

Samuel Szajkowski, a recently hired history teacher, walks into his school with a gun and murders three students and a colleague before turning the weapon on himself. What follows should be an open-and-shut case. As Detective Inspector Lucia May begins digging, however, she discovers a toxic culture that drove a teacher to desperation. But before she can reveal her findings, she must overcome the rampant sexism of her colleagues, and confront two people who wish to suppress the truth.

Unfolding as a series of interviews with witnesses and survivors, A Thousand Cuts is brilliantly performed by a full cast of Recorded Books narrators.

“Lelic wastes not a word in this searing indictment of a culture inured to cruelty …” —Booklist, starred review