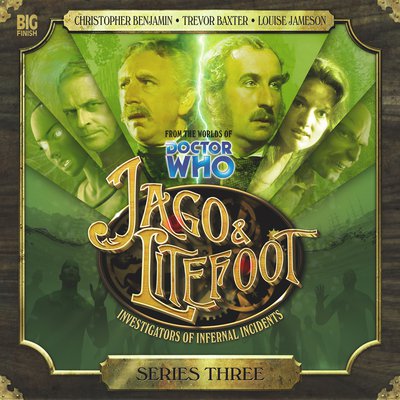 Four more stories featuring the investigators of infernal incidents, with an extra hour of behind the scenes interviews.

Dead Men’s Tales, by Justin Richards
A friend from the past returns to warn Jago and Litefoot of a threat to the future. Time breaks are appearing in Victorian London, but first Leela must help solve the mystery of the Wet Men - terrifying creatures that are rising from the River Thames…

Swan Song, by John Dorney
The New Regency Theatre is haunted and Jago, Litefoot and Leela witness the spirit of someone in a silver wheelchair floating over the stalls. This is the story of Alice - a young woman who had Swan Lake so cruelly taken from her…

Chronoclasm, by Andy Lane
When Litefoot’s home is invaded by giant metal spheres, it seems that the end of the world is nigh. The enemy has revealed itself, the end game is afoot - can two Henry Gordon Jagos save the day?