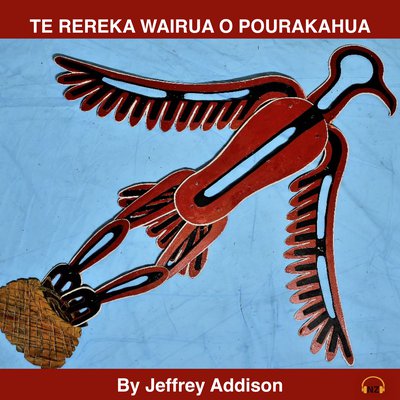 Written and performed by Jeffrey Addison

The Māori language version of the story evolved from a theatrical puppet show by TORO PIKOPIKO PUPPETS, that premiered at TE ANA MĀORI ROCK-ART CENTRE in 2017 called TE REREKA – THE FLIGHT. This rock-art puppet musical was adapted as an on-line interactive e-Audiobook for the Ministry of Education in 2018, and has now been formatted as a 70 minute, 6-chapter audiobook i te reo Kāi Tahu, my tribal dialect. The story is about Pourakahua, who is transformed into a spirit bird that flies to Aotearoa, New Zealand in search of her own kind. In my interpretation, she flies up the Ōpihi river, meeting a host of colourful creatures living in caves and limestone rock shelters, pursued by a bevy of bird-hunters. TE REREKA WAIRUA O POURAKAHUA is informed and inspired by the ancient rock-art from the South Canterbury region. To access the bi-lingual pictorial manuscript of this audio-book and other promotional material go to: www.maorirockartpuppets.com

This audiobook was produced by Jeffrey Addison for