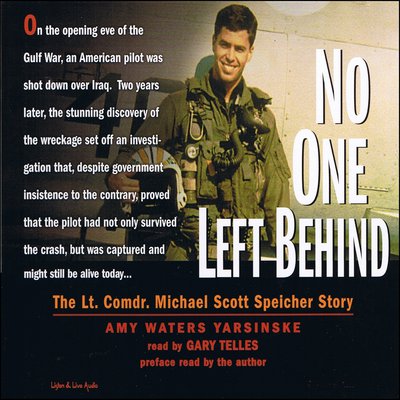 On January 16, 1991, Speicher participated in the initial air strike of the Persian Gulf War. Moments after an attack by an Iraqi MIG-25, Speicher's plane vanished over the Baghdad desert.

The next day, Secretary of State Dick Cheney and Chairman of the Joint Chiefs of Staff Colin Powell told the American public that Speicher was the first casualty of the Gulf War. He was listed as KIA/BNR.

Tracking this explosive story for the past eight years, Yarsinske interviewed top government and military officials, diplomats, pilots, informers, and Iraqi defectors to write a stunning true account of the denials and cover-ups that obscured an essential fact: Speicher actually survived.

This abridged version of No One Left Behind takes us beyond the lies to unearth the truth of the pilot that was left behind.