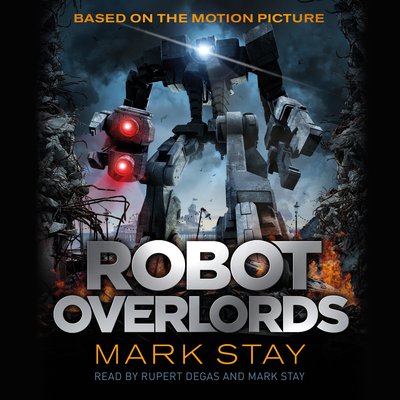 Narrated by Rupert Degas, and with behind-the-scenes diaries narrated by the author and screenwriter Mark Stay. This audiobook also features exclusive sound-effects from the film and the short story THE MEDIATOR PROTOTYPE.

To find his father, one boy must defy an empire...

Three years ago, Earth was conquered by a force of robots from a distant world. They have one rule:

STAY IN YOUR HOMES

Step outside and you get one warning before you're vaporised by a massive robot Sentry, or a crawling Sniper, or a flying Drone. That's if the vast Cube doesn't incinerate you first.

But Sean Flynn is convinced that his father - an RAF pilot who fought in the war - is still alive. And when he and his gang figure out a way to break the robots' curfew, they begin an adventure that will pit them against the might of the ROBOT OVERLORDS.

This fast-paced, thrilling novelisation is based on the hit British film starring Sir Ben Kingsley (IRON MAN THREE), Gillian Anderson (THE X-FILES) and Callan McAuliffe (THE GREAT GATSBY). A perfect companion to the movie, it expands on the story with additional action, characters, and a special peek behind the scenes.