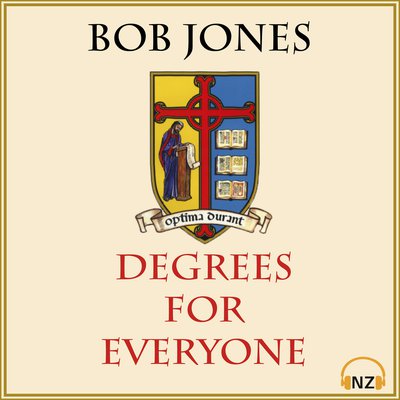 University degrees should be for everyone. Not just for some self-appointed elite who study obscure stuff like Classics, History and Mediaeval Studies. Universities need to offer a range of subjects that will ensure anyone can get a degree in something - it's purely a matter of responding to modern market forces. This is the vision of Ralston University's new Vice-Chancellor. Unburdened by any sense of academic tradition or excellence - and coming from a background in company liquidations - he proceeds to close down the teaching of traditional academic subjects, replacing them with diploma and degree courses in line dancing, hamburgerology and applied witchcraft. More than a new broom that sweeps clean, he is hell-bent on excoriating every last shred of intellectual fibre from the bones of academic tradition. Drawn into this sudden chain of events, can the wise but world-weary Professor Trout save his own job in the Department of Medieval Studies? Or will the monstrous Professor Beefenstein squeeze him out with her teaching of Rubenesque Studies to justify female obesity? Are panelbeating and 'paedophilac studies' to become legitimised as scholarship? It seems anything is possible.

Wellington-based Sir Robert Jones has been described variously over the years as property tycoon, free-enterpriser, self-made man, political party leader, syndicated newspaper columnist, boxing fan and intelligent, sarcastic bastard. Born in Lower Hutt in 1939, he attended Naenae College. Becoming established as a national identity through his career as a property investor and founder and leader of the New Zealand Party from 1983 to 1985, he is also a leading commentator on financial matters, education, and social policy. He has donated statues to municipalities and established humanities scholarships. He counts among his other interests trout fishing, tennis, cricket, politics and gardening.