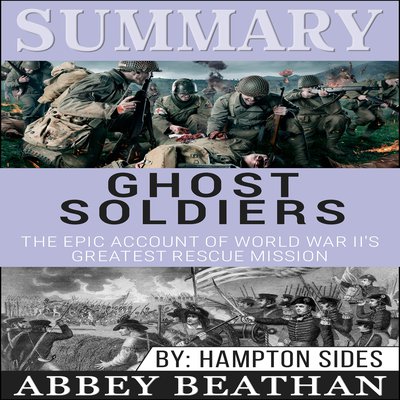 (Disclaimer: This is NOT the original book.)

The epic rescue mission of 511 American prisoners of war rescued from almost certain death, do you know this amazing story?

A story about the loyalty and the undying willpower of elite US troops. They marched for three days through jungle and swamp, facing over 250 japanese soldiers and rescuing dazed prisoners, taking them to safety. Such a heroic missions seems oneiric but it actually happened and in Ghost Soldiers, you'll read all about it.

(Note: This summary is wholly written and published by Abbey Beathan. It is not affiliated with the original author in any way)

"These men suffered enough for a hundred lifetimes, and no one in this country should be allowed to forget it." - Hampton Sides

The immense number of challenges the rescuers faced was outstanding. Bullets and mortars were everywhere, strong japanese troops were all over the place and they were clearly outnumbered. By destroying several bridges along the river in order to hold off the enemy they managed to lead the prisoners to safety. To this date, the raid on Cabanatuan still remains as one of the largest and most successful operations ever executed by the US army.

A definitive bit of history that needs to be read by everybody.