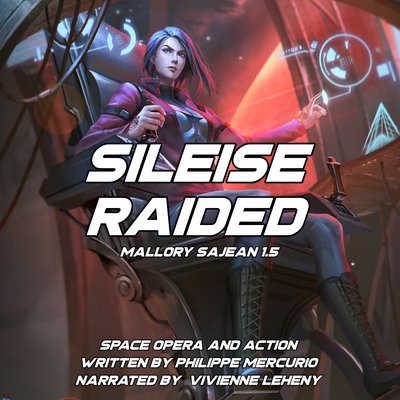 In search of some rest and relaxation, Mallory Sajean comes alongside a space station. She discovers a battlefield and a hostage taking in progress. Despite the risks, she joins up with a squad of police officers who are going to give it their all.

While facing fanatical aliens and cyborgs, Mallory learns that she'll have to defeat a legendary creature: a Sorfal.

Listen to Sileise Raided and experience a heart-pounding adventure!

Philippe Mercurio loves to read science fiction. He is a huge fan of Jack Vance, Simon R. Green, and Frank Herbert. He also likes manga such as Battle Angel Alita and Gantz.

Mallory Sajean’s universe is a cross between Blade Runner and Star Wars, but in a unique way. If you miss TV shows like Farscape or Babylon 5, then this series is for you!

“I simply wrote the kind of stories I would love to read. My goal is to take my readers on a faraway journey that’s full of surprises.”