FEDERALIST No. 65. The Powers of the Senate Continued 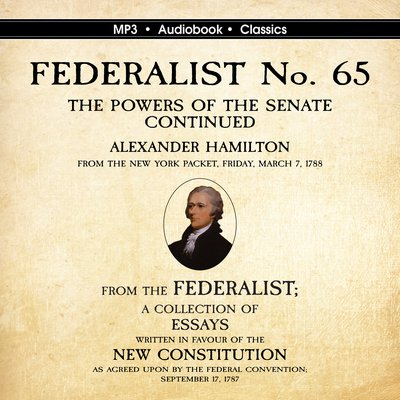 FEDERALIST No. 65. The Powers of the Senate Continued

The Federalist Papers is a series of 85 articles arguing in favor of ratification of the United States Constitution by the thirteen original colonies. The Federalist papers were written in response to criticism of the Constitution. The articles were first published between October 1787 and August 1788 in newspapers and then published in book form in 1788.
Federalist No. 65 discusses the reasoning behind the choice of the Senate to conduct Impeachment trials. He is sanguine about the danger of political factions polarizing the proceedings. He rejects the Supreme Court as too small a body to represent the general public and posits that assigning the House, the representative elected by the body politic, the responsibility of bringing charges and prosecuting an impeachment, and assigning the Senate, a body of wise elders elected by state legislatures, the task trying the matter, is the best that can be done to bring about a necessary separation of powers to achieve a fair and just outcome.