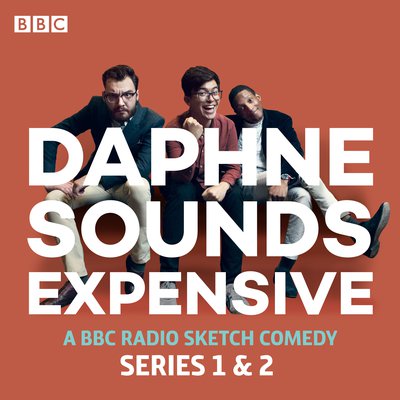 The complete series 1 and 2 of the BBC radio comedy show, written and performed by sketch trio Daphne

'Consistently funny and surprising' The Telegraph

Join critically-acclaimed sketch trio, Daphne, as they pull out all the stops in a dazzling array of peculiar characters, wacky scenarios, curious observations, minor altercations and major peacemaking - served on a bed of catchy little numbers with a live nine-piece band.

It's the show that's got everyone saying 'Who's Daphne?'

In these two series, the gang head off to Malaysia to find Phil's legendary criminal uncle, Pak Belang; set out to solve a mysterious murder on the Yorkshire Moors; embark on a treacherous adventure in a time machine and travel to the lost city of Atlantis in pursuit of a legendary precious metal. Plus, Jason has an out-of-this-world plan to increase the show's listenership, and Phil and George hope to appease the Twitter trolls by keeping the show family friendly - with the help of Sir Paul McCartney.

Scripted by and starring Jason Forbes, Phil Wang and George Fouracres, this gloriously mad-cap comedy was shortlisted for the 'Best Radio Sketch Show' award at the Comedy.co.uk Awards.