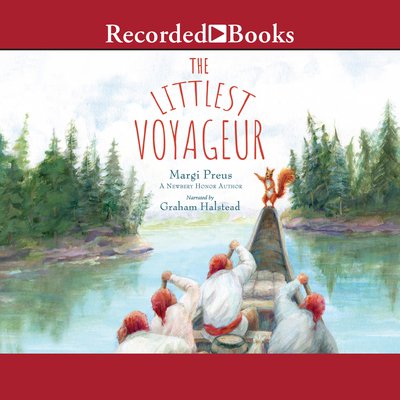 A red squirrel, Jean Pierre Petit Le Rouge, stows away on a canoe to fulfill his dream of joining a group of voyageurs--men who paddle canoes filled with goods to a trading post thousands of miles away. It is 1792 and unbeknownst to a group of voyageurs traveling from Montreal to Grand Portage, an intrepid squirrel, Jean Pierre Petit Le Rouge, sneaks onto their canoe. Le Rouge is soon discovered because he can't contain his excitement--mon dieu he is so enthusiastic. The smells! The vistas! The comradery! The voyageurs are not particularly happy to have him, especially because Le Rouge rides, but he does not paddle. He eats, but he does not cook. He doesn't even carry anything on portages--sometimes it is he who has to be carried. He also has a terrible singing voice. What kind of voyageur is that? When they finally arrive at the trading post Le Rouge is in for a terrible shock--the voyageurs have traveled all those miles to collect beaver pelts. With the help of Monique, a smart and sweet flying squirrel, Le Rouge organizes his fur-bearing friends of the forest to ambush the men and try and convince them to quit being voyageurs.