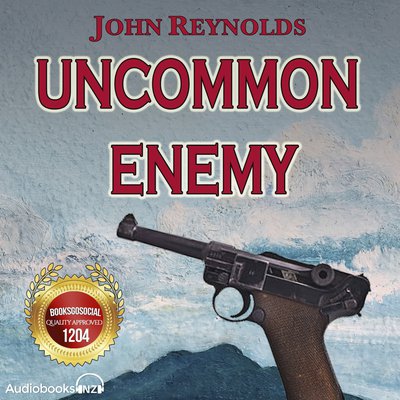 What would life in a democracy like New Zealand have been if it had been occupied by Nazi Germany? Would New Zealanders have resisted or collaborated? This well-researched gripping novel paints a realistic picture of what could have happened. Hamish Beavis, a Nazi collaborator and Stuart Johnson, a resistance member are both in love with beautiful Carol Peterson, who carries a dark secret. Carol's crucial choice and its repercussions are set against a background of violence and betrayal in post-war New Zealand under Nazi rule.

John Reynolds was born in Auckland, New Zealand. A qualified teacher he has taught in London England, Saskatchewan Canada, and Salisbury, Rhodesia (now Zimbabwe). He has travelled widely throughout western and eastern Europe and the USA. He has MA from San Jose State University, California and a PhD from the University of Auckland.

He has written scripts, screenplays several books and co-written five full-length musicals. His first novel Uncommon Enemy is in the "What If?". Germany has won WWII and democratic New Zealand is occupied. (This novel recently won a BooksGoSocial Gold Award and has been revised the re-released. His latest young adult novel Robyn Hood Outlaw Princess is based on one of the musicals by the same name. He has also published a second edition of his popular Writing Your First Novel - a book for aspiring authors of fiction.

He has recently co-written a new musical titled "Pirates and Petticoats" loosely based on the true stories of female pirates Ann Bonny and Mary Read, as well as Captain Kidd who all sailed on the Spanish Main. A great story with colourful characters and a variety of songs and genres. Ideal for schools or community groups.

A really great read. Growing up in the area where some of the action took place made it particularly interesting. Liked the characters and alternative history storyline.

A really great read. Growing up in the area where some of the action took place made it particularly interesting. Liked the characters and alternative history storyline.