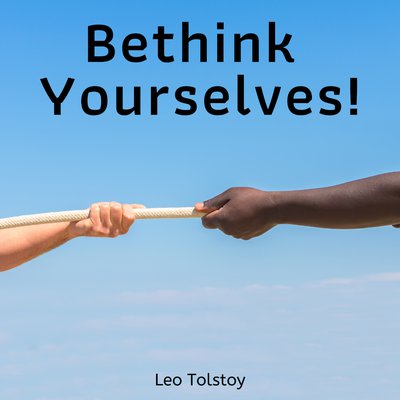 "Bethink Yourselves" is a classic anti-war text by the great Russian author, Leo Tolstoy inspired by the Russo-Japanese War, 1904-1905, and includes the following excerpt: Again war. Again sufferings, necessary to nobody, utterly uncalled for; again fraud; again the universal stupefaction and brutalisation of men. Men who are separated from each other by thousands of miles, hundreds of thousands of such men (on the one hand-Buddhists, whose law forbids the killing, not only of men, but of animals; on the other hand-Christians, professing the law of brotherhood and love) like wild beasts on land and on sea are seeking out each other, in order to kill, torture, and mutilate each other in the most cruel way. What can this be? Is it a dream or a reality? Something is taking place which should not, cannot be; one longs to believe that it is a dream and to awake from it. But no, it is not a dream, it is a dreadful reality!