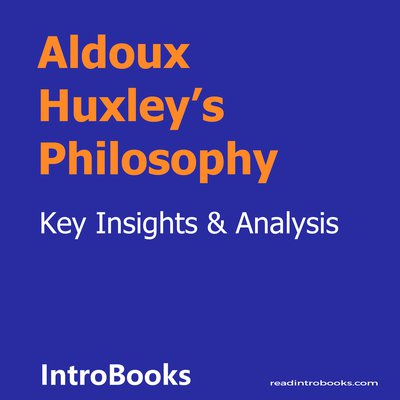 Aldous Leonard Huxley (26 July 1894 – 22 November 1963) was an English philosopher and writer. He published nearly 50 books, both works of non-fiction and novels, as well as lengthy articles, essays, and poems. Raised into the influential Huxley family, he received a degree in English literature at Balliol College, Oxford. He wrote poetry and short stories at the beginning of his career and edited Oxford Poetry's literary journal, before releasing satire, screenplays, and travel writing. He lived the last part of his career, residing in Los Angeles from 1937 until his death.

By just the end of his career, Huxley was generally regarded as one of the leading thinkers of his time. He was proposed seven times for the Nobel Prize in Literature and was appointed Companion of Literature by the Royal Society of Literature in the year. He was interested in metaphysical universalism and mysticism, discussing these topics through works such as The Perennial Philosophy (1945), which explores the commonalities between Western and Eastern mysticism, and The Doors of Perception (1954), which interprets his mystical encounter of mescaline.

He introduced his vision of dystopia and utopia in his most popular novel Brave New World (1932), and his final novel Island (1962), respectively.