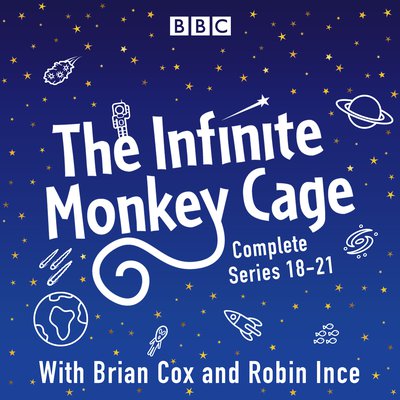 One of BBC Radio 4's most popular programmes, The Infinite Monkey Cage sees physicists Robin Ince and Brian Cox taking a witty, irreverent look at the world through scientists' eyes. Aided by guests from the worlds of science, academia and entertainment, they delve into a variety of topics in a quest to explore the quirks and wonders of the universe.

In these 25 episodes, they celebrate their 100th show with some very special appearances from Monkey Cage alumni including Brian Blessed, Eric Idle and Andy Hamilton; talk cryptography and codebreaking at GCHQ; look at the origin of numbers; and learn how to build a bionic human. There's also a discussion about dinosaurs; a sleepy look at the science of dreaming; and a Brits in Space special featuring astronauts Tim Peake and Helen Sharman - plus The Infinite Moonkey Cage, a 60-minute episode in which they are joined by some of the key players involved in landing the first men on the moon on July 20th 1969.