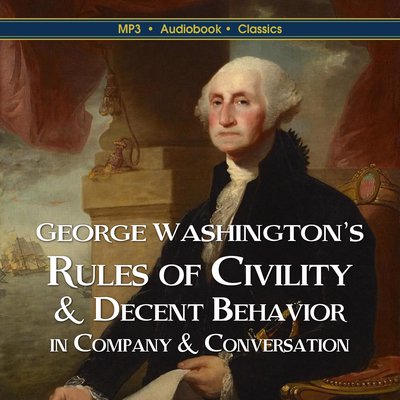 George Washington's Rules of Civility and Decent Behavior in Company and Conversation is a set of 110 precepts or maxims on such matters as how to dress, how to walk, how to eat in public, and how to behave correctly in the company of superiors and equals. While containing the clear guidance in propriety, the rules also address moral issues, albeit somewhat indirectly. The rules are based on a set of precepts found in a treatise “Bienseance de la Conversation” prepared by Jesuit instructors in the 16th century. They were translated into Latin and English, and eventually were translated by the precocious eight-year-old Francis Hawkins into an English version that was published in 1649 and went through eleven editions by 1672. The rules appear on ten pages at the end of the second volume of schoolboy exercises included among the hundreds of Washington manuscripts located in the Library of Congress. Washington copied out these rules at about age 16 as both an exercise in handwriting and as a means to master topics worthy of consideration in the building of character, and thus important to a young man on the verge entering into adulthood.
- From the “Origin of the Rules of Civility”, by Charles Moore, 1926