Bomb Heard Around the World, The 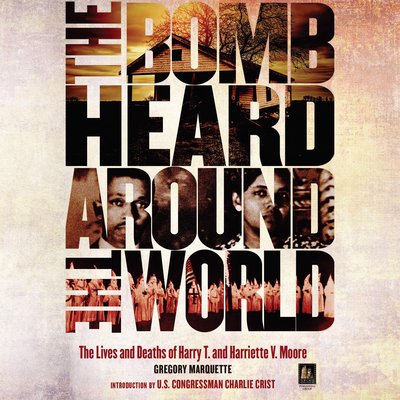 Bomb Heard Around the World, The

In 1951 American terrorism was homegrown. There were no battles fought on American soil, yet there were 12 bombings targeting black Americans, Catholics, and Jews in "Jim Crow" Florida. One of those bombs was, symbolically, heard around the world.
Harry T. Moore and his wife, Harriette, were murdered on Christmas night 1951 by racist terrorists. Ironically, Harry knew he was a target of the KKK but swore he would keep going, working on rights for African Americans.
WWll had just ended and apart from Pearl Harbor, Americans had never experienced the shock and tragedy of war on 'home soil'. Americans, for a long time, paid little attention to the persecution of blacks and other minorities, despite the multitude of violent, racist episodes, not dissimilar from events in Nazi Germany.
This book explores the events leading up to the Moore assassinations and follows long after, with extensive investigations by the FBI, Florida Department of Law Enforcement, Brevard County Sheriff's Office, and the Dept. of Justice. What they uncovered was remarkable, and the corruption that accompanied the crime was shocking. The Bomb Heard Around the World reveals new information and facts which exposes both savage corruption and exceptional courage over decades in America.
The Moore assassinations became an international referendum on America and its values. At the end of WWII the world turned to America as the beacon of freedom and liberty, yet after the deaths of the Moore’s, world opinion shifted. This journey through their lives and deaths is a road trip through the history of America and while this is the story of the Moore's, it is also a story for today. With many unjustified killings of blacks in America today, the racial divide has widened.
Decades after the assassinations, a Republican Attorney General, Charlie Crist, would take on this criminal case in an attempt to solve the assassinations once and for all. He faced enormous political pressures yet stayed the course.