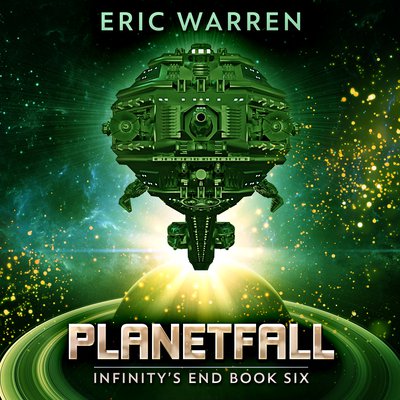 The crew of the USCS Tempest has faced many hardships, but none so dire as crashing on a planet with no way to contact their ship. Now with no power, no resources and no idea how to get back, they’ll have to find a way to survive on this strange, untamed world.

But not all is as it seems. This planet hides some dark secrets, such as why does the sun never seem to set? Or why, despite a lush environment, are there no other species here? Caspian, Evie and the rest of the crew have their work cut out for them if they want to discover the truth behind these mysteries. This planet was supposed to be a haven while they repaired the Tempest, but it’s quickly becoming a death trap.

And the only way off may be for Cas and Evie to face what they fear the most: failure.

PLANETFALL is the sixth book in the highly successful INFINITY’S END saga. Culminating the second set of trilogies in this series, this is one book you won’t want to miss! Pick it up today!