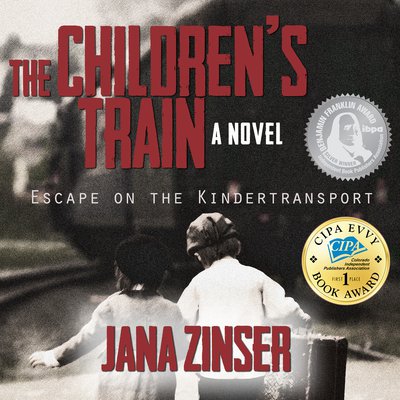 Escape on the Kindertransport

This compelling Holocaust action adventure story tells of bravery, sacrifice, and the survival of the human spirit against Hitler and the horrors of war.

"Gripping and impossible to put down. I cried several times throughout. Perfect ending, emotional but complete." - Goodreads review

It begins in November 1938 on The Night of the Broken Glass, when Jewish people of Germany are terrified as Hitler's men shatter their store windows, steal and destroy their belongings, and arrest many Jewish fathers and brothers.

Parents face unparalleled fear for their own lives but their focus is on protecting their beloved children.

When England arranges to take the children out of Germany by train, the Kindertransport is organized and parents scramble to get places on the trains for their young family members, worried about what the future will hold.

Soon, trains filled with Jewish children escaping the Nazis chug over the border into Holland, where they are ferried across the English Channel to England and to freedom. But for Peter, the shy violin player, his sister Becca, and his friends Stephen and Hans, life in England holds challenges as well. Peter's friend Eva, who did not get a seat on the Kindertransport, is left to the evil plans of Hitler.

Peter, working his musician's hands raw at a farm in Coventry, wonders if they should have stayed and fought back instead of escaping. When the Coventry farm is bombed as the Nazis reach England, Peter feels he has nothing left. He decides it's time to stand and fight Hitler.

Peter courageously returns to Germany to join the Jewish underground resistance, search desperately for his mother and sister he left behind in Berlin, and try to rescue his friend Eva.

"A beautifully written book. Sadly, the historical details are true and this makes the story all the more poignant. At times heartbreaking, at times hopeful and optimistic, this book will stay with the reader for a long time. The author is definitely one to watch ~Dorothy M Calderwood (Media Professional) for NetGalley

". . . Jana Zinser brilliantly expresses the horror, confusion and fear that not only Peter but the other children in the novel are feeling and thinking when witnessing the atrocities by the Nazis . . When I began this book I thought that I had quite a lot of knowledge about the Holocaust but I was surprised to learn about the Kindertransport children. Although this novel is fiction, the Kindertransport was not and I will never forget about the ones that made it on those trains and also the ones who did not . . ." - Amanda - NetGalley and Goodreads reviews

". . . The Children's Train by Jana Zinser absolutely blew me away! Heartbreaking, terrifying and traumatic it was also filled with hope and courage, determination and inspiration. Over six million Jews died at the hands of the Nazis and many of them were children. Though The Children's Train is fiction, the sad and tragic truth stands out and stays with you. I know this book will stay with me! The Children's Train is an absolute credit to this author and I have no hesitation in recommending it extremely highly. . . " - Brenda, Goodreads review

"I'm positive that I held my breath for most of this book. I wouldn't be surprised if I'd held my breath for the entire time I'd been reading this. This book was so unlike any other I've read. It's gripping, powerful, heartbreaking and intense --- so, so, so intense . . .