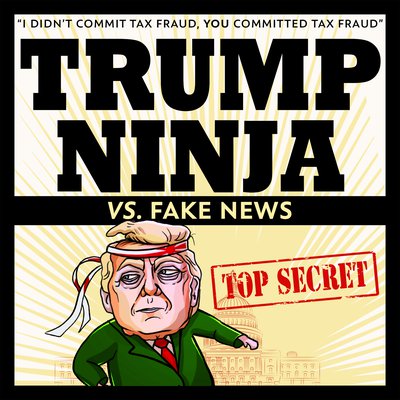 Donald Trump is a legend in his own mind. He wants you to take him seriously. Very seriously indeed.

Donald Trump DOES NOT want you to read his (totally unauthorized and fictional) diary and he absolutely in no way wants you to know what insiders refer to as his "secret identity."

The rest of us may see a conspiracy-theory-promoting, sexist, racist, homophobic, science-denying narcissistic criminal who would love to undermine the Constitution to make himself president for life.

But the he sees a ninja: Trump Ninja.

From the would-be facist who wants to kill off the free press, comes a brand new book for your outrage and amusement. Or amused outrage.

Trump Ninja vs. Fake News, sees our Colluder-in-Chief in Mission-Impossible mode trying to figure out how to take down the New York Times server, while saving the world from S.N.O.W.F.L.A.K.E., the conspiracy behind the conspiracies.

EXCERPT FROM CLASSIFIED ENTRY INCLUDED BELOW:

I don’t know if you’ve seen some of the stuff they’re saying about me? Don’t look it up. It’s just very sad. Nobody should waste their time on the stuff. Nobody should have to see the very mean and rude things people say about me. This Fake News Media.

But I’ve got it under control.

I’m going to take down The Server.

Trump Ninja vs. Fake News. KERLAMO! Go get it.

Trump Ninja spin-kicks his way to the best-seller list with the super secret (aka fictional) history of the most tremendous and best (I just vomited in my mouth a little) presidency America has ever seen. Trump Ninja vs. Fake News is book three in the seven book Trump Ninja series. Get them all today!