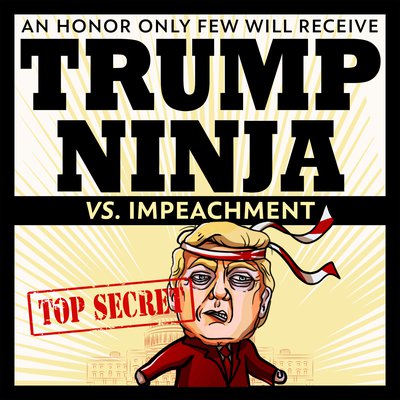 An Honor Only Few Will Receive

Donald Trump hates being laughed at. So let's laugh.

Donald Trump DOES NOT want you to read his (totally unauthorized and fictional) diary and he absolutely in no way wants you to know what insiders refer to as his "secret identity."

We see a criminal who hides tax records, misuses money from his own charities, and invokes the presidential pardon to shield business buddies and accomplices from the consequences of their actions.

But the he sees a ninja: Trump Ninja.

From the guy who likes to "joke" about being president for life and asks foreign governments to dig up dirt on his political opponents, comes a brand new book for your outrage and amusement.

Trump Ninja vs. Impeachment, sees our Colluder-in-Chief trying to figure out what the word Impeachment actually means, while saving the world from S.N.O.W.F.L.A.K.E., the conspiracy behind the conspiracies.

EXCERPT FROM CLASSIFIED ENTRY INCLUDED BELOW:

I’ve been nominated for an impeachment. Huge honor. The best. Very few people have gotten this, I’ll tell you that. Clinton. He got one. This was back when he was a good guy. I bet the presidents of other countries, they’re going to be calling in and congratulating us.

And who do you think is popular? Big league. PAM! President.

Trump Ninja vs. Impeachment. KERSPLAMO! Go get it.

Trump Ninja spin-kicks his way to the best-seller list with the super secret (aka fictional) history of the most tremendous and best (I just vomited in my mouth a little) presidency America has ever seen. Trump Ninja vs. Impeachment is book four in the seven book Trump Ninja series. Get them all today!