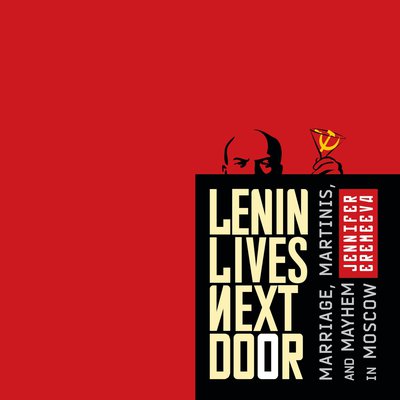 Marriage, Martinis, and Mayhem in Moscow

"You can't make this stuff up."

So says American writer, Imperial Russia enthusiast, Romanov junkie, and veteran expatriate, Jennifer Eremeeva, who has lived for the last twenty years in Russia after she fell in love with, and married HRH, her Handsome Russian Husband (occasionally a.k.a. Horrible Russian Husband). Luckily for Eremeeva, she didn't need to make up most of the events that inspired this, her first novel. When she (and her alter-ego heroine, coincidentally named Jennifer) quit her job to write full time, she became enthralled with the dingy gray building across the courtyard from her apartment, where, it turned out, Vladimir Lenin's embalmed corpse was routinely freshened up and preserved. The result is Lenin Lives Next Door: Marriage, Martinis, and Mayhem in Moscow.

Based on Eremeeva's two decades in Russia, Lenin Lives Next Door knits together vignettes of cross-cultural marriage and expatriate life with sharp observation, colorful historical background, and engaging humor. Each thematic chapter is an anecdotal exploration of an aspect of life in today's Russia, told with the help of a recurring cast of eccentric Russian and expat characters.

Lenin Lives Next Door introduces readers to Russians in their everyday milieu: at their dachas, in three-day traffic jams, and celebrating their 300-plus public and professional holidays with mayonnaise-based salads. For anyone who has ever long to visit Russia, this witty and engaging novel is the perfect tour guide. Short listed for a total of ten prestigious publishing awards Lenin Lives Next Door is a delightfully fresh inside look at Russia by a recovering Russophile.