What I Have Learned About - The Demise of Mankind 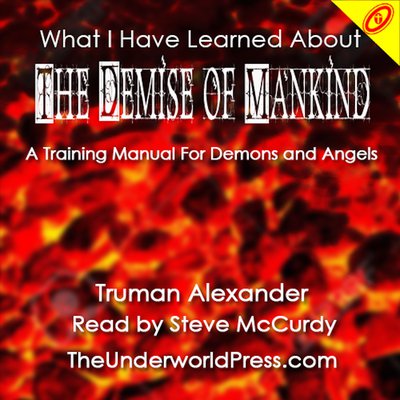 What I Have Learned About - The Demise of Mankind

A Training Manual for Demons and Dark Angels

Please note: This content is for mature audiences only. It contains sobering language and graphic depiction of dysfunctional ways in which the world is run, as well as strong content and themes. Discretion is advised.

A World of Trouble

Today the world is nose-deep in trouble; moral, ethical, social, political, and legal. How did we get here?

That is the right question to ask.

"What I Have Learned About the Demise of Mankind," is a not-so-fictional revelation of the key answers to that question. In this paradigm-shifting debut novel, Truman Alexander reveals the evil works of The Dark One on earth by exposing the Underworld's training manual for new devils, tempters, and dark angels.

Steve McCurdy's voice acting does the heavy lifting of the curiously unusual sentence structure specific to the Underworld Training Manual - clearly not written for mere mortals. Like an ice-cold schooner of crisp beer, it is authentic and refreshing with a possible chilling side-effect.

The book forces listeners to think about their own decisions. Excuses are taken away one-after-another. It immerses one into an introspective examination of life up until now. After this, it is impossible for an intelligent reader NOT to want to better his or her life.

"What I Have Learned About the Demise of Mankind," is a unique audiobook that reveals how we, the humans, have unwittingly collaborated with the Underworld to cut our own throats. We don't even feel the pain - until it is too late.

Understanding the problem is half the solution.

If you are completely satisfied with your life - you don't need this book.

If you are NOT satisfied - you can't LIVE without this book.

It is your life and your call.