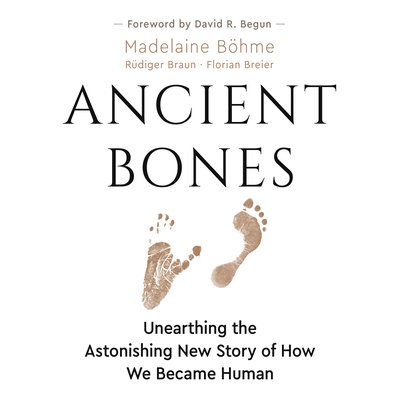 A thrilling new account of human origins, as told by the paleontologist who led the most groundbreaking dig in recent history.

Somewhere west of Munich, Madelaine Böhme and her colleagues dig for clues to the origins of humankind. What they discover is beyond anything they imagined: the fossilized bones of Danuvius guggenmosi ignite a global media frenzy. This ancient ancestor defies our knowledge of human history—his nearly twelve-million-year-old bones were not located in Africa—the so-called birthplace of humanity—but in Europe, and his features suggest we evolved much differently than scientists once believed.

In prose that reads like a gripping detective novel, Ancient Bones interweaves the story of the dig that changed everything with the fascinating answer to a previously undecided and now pressing question: How, exactly, did we become human? Placing Böhme’s discovery alongside former theories of human evolution, the authors show how this remarkable find (and others in Eurasia) are forcing us to rethink the story we’ve been told about how we came to be, a story that has been our guiding narrative—until now.