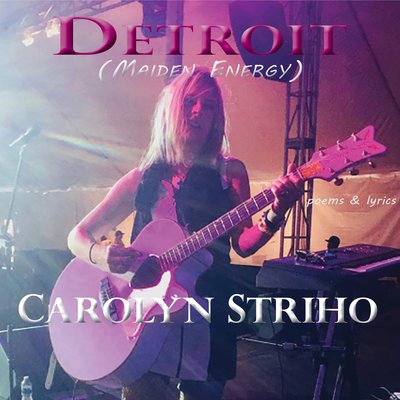 Detroit (Maiden Energy) is a critically-acclaimed compilation of Detroit rocker Carolyn Striho’s expansive body of work, with “street princess” poems, and lyrics written for music ranging from rock to soul/pop to gypsy folk.

Striho's most recent album, Afterthought, was on the GRAMMY® Awards 2018 First Ballot for Best Rock Album of the Year. Nominated for over 60 Detroit Music Awards in recent years, Striho has won 11 Detroit Music Awards and a Billboard Magazine Award for her songwriting, albums, musicianship and live performances. Striho also has toured overseas six times, playing many national and international festivals including Lollapalooza, Rome Italy's Donne In Musica, London U.K. Meltdown, and many more. Striho has also performed with Patti Smith on two tours, and with her band, Detroit Energy Asylum and Was (Not Was).

"Carolyn Striho is the personification of Detroit Rock energy, charisma, beauty and talent. On stage, she is a force of nature, but this collection of her poems and lyrics allows us to experience this dynamic artist in a more intimate and personal way. Carolyn Striho is long overdue for a book just like this!" --Ann Delisi, Host, Ann Delisi Essential Music, NPR/WDET-FM

"In her song lyrics and poetry, Carolyn Striho opens up her heart and her head, blending emotion and psyche into a brave and provocative look into herself and the world around her. Whether it's direct or abstract, you get engrossed in her words without even thinking about it, taking the trip willingly and coming out the other side all the better for it." –Gary Graff, Billboard/New York Times Syndicate