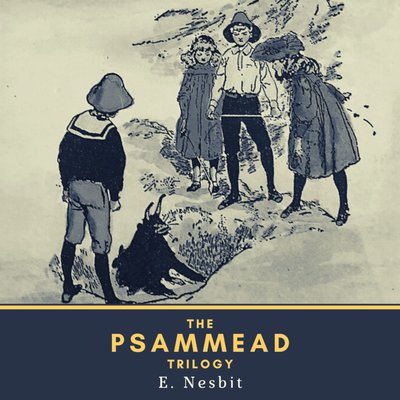 Five Children and It, The Phoenix and the Carpet & The Story of the Amulet

The Psammead Trilogy includes three novels about the five children Cyril, Anthea, Robert, Jane and the Lamb.
Five Children and It is a children's novel by English author E. Nesbit. It was originally published in 1902 in the Strand Magazine under the general title The Psammead, or the Gifts, with a segment appearing each month from April to December. The stories were then expanded into a novel which was published the same year. It is the first volume of a trilogy that includes The Phoenix and the Carpet (1904) and The Story of the Amulet (1906). The book has never been out of print since its initial publication.
The Phoenix and the Carpet is a fantasy novel for children, written by E. Nesbit and first published in 1904. It is the second in a trilogy of novels that begins with Five Children and It (1902), and follows the adventures of the same five children: Cyril, Anthea, Robert, Jane and the Lamb. Their mother buys the children a new carpet to replace one from the nursery that they have destroyed in an accidental fire. The children find an egg in the carpet, which hatches into a talking Phoenix. The Phoenix explains that the carpet is a magic one that will grant them three wishes a day. The five children go on many adventures, which eventually wears out their magic carpet. The adventures are continued and concluded in the third book of the trilogy, The Story of the Amulet (1906).
The Story of the Amulet is a novel for children, written in 1906 by English author E. Nesbit. It is the final part of a trilogy of novels that also includes Five Children and It (1902) and The Phoenix and the Carpet (1904). In it the children re-encounter the Psammead - the "it" in Five Children and It. As it no longer grants wishes to the children, however, its capacity is mainly advisory in relation to the children's other discovery, the Amulet, thus following a formula successfully established in The Phoenix and the Carpet.