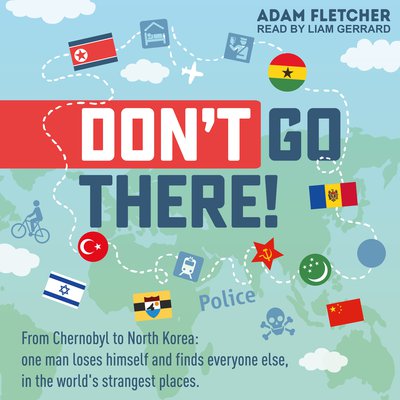 It was supposed to be a normal city break . . .

. . . it ended in the strangest places in the world.

They shouldn't have tear gassed bestselling (bald) author Adam Fletcher. It ruined his supposedly normal holiday in Istanbul, made him curious, and began a quest to visit places everyone else is trying to escape from, and tourists don't normally go to.

In this hilarious travel memoir, he'll enter a blizzard in China armed with only biscuits; pose as a scientist to sneak into Chernobyl; be chased by Croatian police boats en route to Liberland (the world's newest country); stalk the Sheriff of Transnistria (its most corrupt); become a reluctant diving board star in a North Korean water park, and much more.

Accompanied by his eccentric German girlfriend, Annett, this adventure to ten unusual destinations will also put their sanity, safety and relationship in jeopardy.

Packed full of interesting people (including the Devil incarnate and someone having their mind remotely controlled), weird locations, and British humor, Don't Go There takes you on an unforgettable journey with an award-winning travel writer.