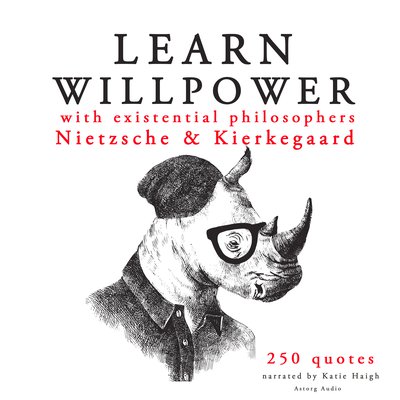 Learn willpower with 250 quotes by the two most famous existential philosophers: Nietzsche and Kierkegaard.

Nietzsche is a major figure in Western philosophy. His work is radical, sometimes violent, often ironic; it fascinates anyone bold enough to delve into it, exerted a profound influence on modern intellectual history, and covers a wide range of subjects. Nietzsche's writings borders on the poetic; his aphorisms are particularly well-known for conveying all the radicalism of his thinking in an intense but light, sometimes amusing manner. We have selected for you 150 of his most fascinating quotes, some of which have found their way into our daily expressions; enjoy the intensity of his writing, and dare to take a look into the abyss with this fascinating new audiobook.

Søren Kierkegaard, a name meaning "church garden", is a Christian philosopher whose work had a considerable influence on western philosophy and theology. His thoughts focused primarily on what it means to become a subject of one's existence, what feelings arise when faced with life choices, and the relation with God through faith. He is credited with numerous reflections on the three stages of life; he also questioned existential despair, absurdity and anxiety. We have selected for you 100 of his most inspiring quotes, for you to discover the inner workings of this most sincere and touching thinker.