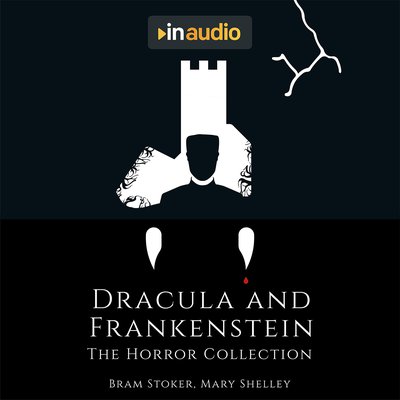 Settle in for an unsettling listen with this duo of two horror classics: Dracula by Bram Stoker and Frankenstein by Mary Shelley. These two books are staples of the Gothic horror genre and are sure to excite, mystify, and maybe even spook listeners.

Dracula - While there have been many famous vampires in modern media, none are as well-known as Dracula, the modern introduction to the blood-drinking creatures of the night. In this epistolary horror novel, readers are introduced to Count Dracula as he attempts to move to England to find new prey and create new vampires. He is thwarted by Abraham Van Helsing, a doctor who sees Dracula’s victims and gathers hunters to fight against the growing team of vampires. With thematic elements of suspense and Gothic horror, and broad themes of colonialism, religion, sexuality, and the thin line between life and death, Dracula is a story for the ages.

Frankenstein – Frankenstein is the classic story of a mad scientist’s experiments gone horribly wrong. When Victor Frankenstein decides to experiment with creating life from non-living matter, he inadvertently creates a creature that will reflect both the best and worst parts of humanity. Created from a hodge-podge of human remains, the Creature’s appearance is ghastly and horrific, and his lack of a soul makes him predisposed to violence and destruction. But he gains intelligence and reasoning skills, which he uses to demand better treatment from Victor, with threats of violence as his bargaining chip. Victor’s reluctance to help his creation live a fulfilled life leads to a horrific streak of murders and violence. Frankenstein is an important work that asks readers to consider human nature, ethical responsibility, and the intrinsic value of all life forms.