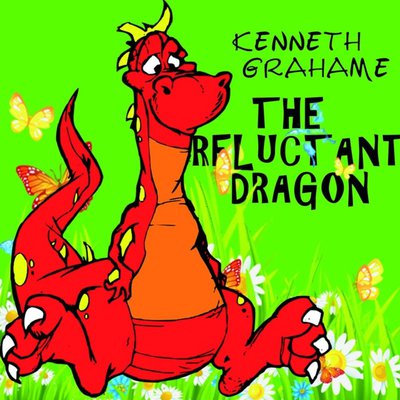 "The Reluctant Dragon" is an 1898 children's story by Kenneth Grahame, originally published as a chapter in his book Dream Days. It is Grahame's most famous short story, arguably better known than Dream Days itself or the related The Golden Age. It can be seen as a prototype to most modern stories in which the dragon is a sympathetic character rather than a threat.The story takes place in the Berkshire Downs in Oxfordshire (where the author lived and where, according to legend, St. George did fight a dragon).In Grahame's story, a young boy discovers an erudite, poetry-loving dragon living in the Downs above his home. The two become friends, but soon afterwards the dragon is discovered by the townsfolk, who send for St George to rid them of it. The boy introduces St George to the dragon, and the two decide that it would be better for them not to fight. Eventually, they decide to stage a fake joust between the two combatants. As the two have planned, St George harmlessly spears the dragon through a shallow fold of skin suggested by the dragon, and the townsfolk rejoice (though not all of them, as some had placed bets on the dragon winning). St George then proclaims that the dragon is reformed in character, and he assures the townsfolk that the dragon is not dangerous. So the dragon is then accepted by the people.Famous works of the author Kenneth Grahame: Pagan Papers, The Golden Age, Dream Days, including «The Reluctant Dragon», The Headswoman, The Wind in the Willows.