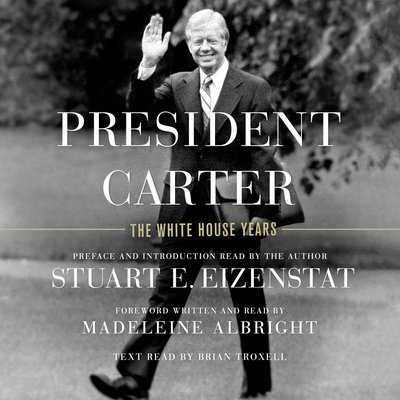 This program includes a forward written and read by Madeleine Albright, with a preface and introduction read by Stuart Eizenstat.

The definitive history of the Carter Administration from the man who participated in its surprising number of accomplishments—drawing on his extensive and never-before-seen notes.

Stuart Eizenstat was at Jimmy Carter's side from his political rise in Georgia through four years in the White House, where he served as Chief Domestic Policy Adviser. He was directly involved in all domestic and economic decisions as well as in many foreign policy ones. Famous for the legal pads he took to every meeting, he draws on more than 7500 pages of notes and 350 interviews of all the major figures of the time, to write the comprehensive history of an underappreciated president—and to give an intimate view on how the presidency works.

Eizenstat reveals the grueling negotiations behind Carter's peace between Israel and Egypt, what led to the return of the Panama Canal, and how Carter made human rights a presidential imperative. He follows Carter's passing of America's first comprehensive energy policy, and his deregulation of the oil, gas, transportation, and communications industries. And he details the creation of the modern vice-presidency.

Eizenstat also details Carter's many missteps, including the Iranian Hostage Crisis, because Carter's desire to do the right thing, not the political thing, often hurt him and alienated Congress. His willingness to tackle intractable problems, however, led to major, long-lasting accomplishments.

This major work of history shows first-hand where Carter succeeded, where he failed, and how he set up many successes of later presidents.