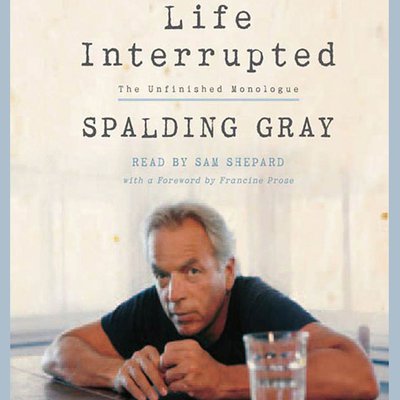 Life Interrupted was the monologue that Spalding Gray was working on when he died in the early winter of 2004.

Famous for his often manic and always humorous monologues, Gray was, by the late 1990's, in a happy marriage living in Long Island, doing yoga every day. But his life became unhinged after a devastating car accident in Ireland in 2001, which fractured his skull and crushed his hip. It sent Gray into a deep and unremitting depression.

But the fact that Spalding had begun performing a new piece in October of last year gave his friends and family reason to hope that he was emerging from his despair. The monologue recounts the story of the accident and Gray's hospitalization in Ireland with gallows humor: "The following day I slipped into a depression and I didn't know whether to tell the Irish about it, whether they would acknowledge this depression. I mean, does a fish know it's swimming in water? It's indigenous to the rainy culture."

The last time Gray performed his work-in-progress "Life Interrupted" at PS 122, he also read a short story called "The Anniversary," about the afternoon he spent with young Theo at the Carousel in Central Park on the tenth anniversary of the day he met his wife, Kathie Russo. Like the unfinished monologue, this piece is also much darker than Gray's early work. The third piece in this collection is a very short, remarkably poignant letter Spalding wrote about the terrorist attacks of September 11, titled "Dear New York City."