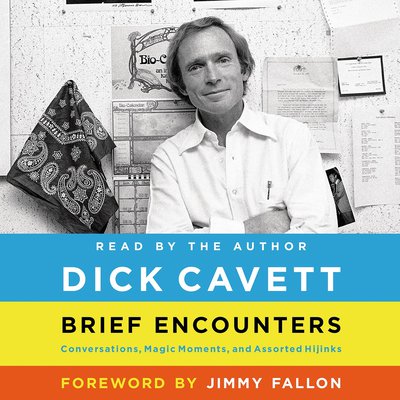 Dick Cavett is back, sharing his reflections and reminiscences about Hollywood legends, American cultural icons, and the absurdities of everyday life.

In Brief Encounters, the legendary talk show host Dick Cavett introduces us to the fascinating characters who have crossed his path, from James Gandolfini and John Lennon to Mel Brooks and Nora Ephron, enhancing our appreciation of their talent, their personalities, and their place in the pantheon. We tag along as Cavett spends an afternoon with Stan Laurel at his modest apartment in Los Angeles, spars with Muhammad Ali at his training camp, and comes to know a young Steve Jobs—who woos him to be Apple's first celebrity pitchman. He also offers piquant commentary on contemporary politics, the indignities of travel, the nature of comedy writing, and the utter improbability of being alive at all.

On his talk show, Cavett welcomed the leading figures from film, music, theater, literature, comedy, sports, and politics, and engaged them in conversation that made viewers feel that the discussion was taking place in their own living rooms. Jimmy Fallon, the new host of The Tonight Show, has called him "a legend and an inspiration" and has written a foreword that makes clear the debt that today's talk show hosts owe to Dick Cavett. Brief Encounters opens the door on how Cavett's mind works and what it is like to live in his world.

To spend a few minutes, or an hour, or even a whole evening with Dick Cavett is an experience not to be missed, and now there's no reason to deny yourself. Settle in, and enjoy the conversation!