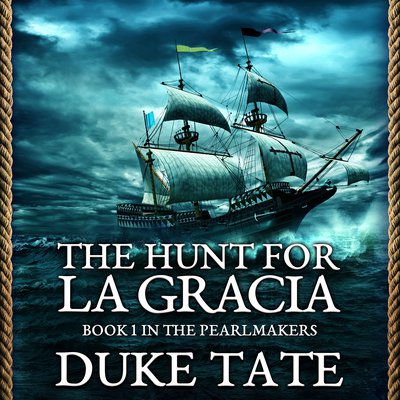 The Hunt for La Gracia

Teddy Dollarhide, a rough man with ruddy skin and pearl-white hair whom everyone calls “Old Salt,” is plagued by reoccurring dreams in which he is a crew member on the Spanish galleon La Gracia that he believes went down in a violent hurricane in the 17th century with countless jewels and gold on board.

His four-man crew, The Pearlmakers, have been searching around the waters of Latchawatchee, Florida, for the last six years.

They have only found scraps from the vessel and time is running out as Teddy owes back taxes on his massive historic estate, Isabella, that he can no longer afford to pay. A pair of aggressive real estate developers keep pressuring Teddy to sell off his land for an enormous sum so they can turn the parcel into a cheesy condominium called Casablanca.

As the tax deadline closes in, Teddy’s son Cosby, a curly-headed high school senior, finds an antique pistol in the ocean while surfing, suggesting to Teddy that the bounty must be in another location. Meanwhile, Teddy’s other son, Joey, returns home from California for his brother’s graduation and ends up tangled in love with a quirky, beautiful southern belle named Annabelle Burns with an overbearing, rich father.

A deadly hurricane hits the town and Teddy’s sons and their girlfriends end up hunkering down in Isabella with Teddy and a host of other characters full of southern charm and wit. Teddy spins yarns about his family quests for gold in the Sierras, inspiring his sons to consider heading out on their own adventure.

This first installment in The Pearlmakers saga promises a rich, lively tale full of adventure, romance, and passion.