Bottom of the Ninth, The 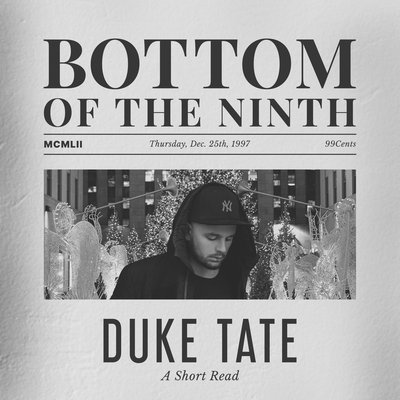 Bottom of the Ninth, The

t’s Christmas time in New York City and the bottom of the ninth in Maximilian Clark II’s life.

His father, Max senior, just passed from cancer. Meanwhile, Max lost his job selling pizza during Knicks' games at Madison Square Garden and his fake watch collection he usually sells on the corner of Times Square was stolen from his beat up Chevy van later that same day.

Unable to make rent, his wife left him with their two kids after they were served an eviction notice to be out of their Harlem apartment in just two weeks.

Descended from a line of die-hard Yankees’ fans, Max realizes there is more to life than just baseball and needs money soon, but how? After attending a series of Get Rich Seminars and coming up empty, he wonders if he will ever get the score he needs to get out of his slump.

Can he save his life before the bottom of the ninth?

Find out in this short read by Duke Tate.