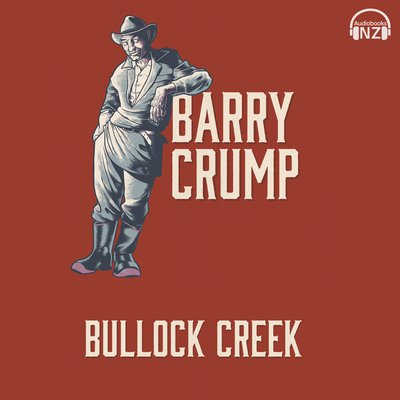 Bullock Creek
Barry Crump was one of New Zealand’s most popular authors of all time. From A Good Keen Man in 1960 through to his death in 1996, over a million copies of the 24 books he wrote were sold. He was a superb storyteller, who captured perfectly the laconic humour and the lifestyle of the rugged Kiwi outdoors man. His ability to craft a tale that is both moving and funny is superbly illustrated by the huge international success of the movie Hunt for the Wilderpeople, which is based on his book Wild Pork and Watercress.
Almost all of Barry Crump’s books are now out of print. A new volume of collected stories published in 2017 remedied that. And the five classic yarns comprising that volume are available in ebook form as separate titles – A Good Keen Man, Bullock Creek, Gold and Greenstone, Puha Road, and Wild Pork and Watercress.

About Bullock Creek:
Barney Carter – ‘… sharp as a sack-needle and as tough as a wool-pack.’ – returns to his old stamping-ground in the high-country of the Southern Alps and meets up with a bunch of hard and colourful merino sheep-farmers. Barney wins their respect and they accept him by bestowing upon him a nickname that will stick to him for the rest of his life.
He takes up the challenge of wintering it out on Bullock Creek Station, on the bleak slopes of the Barker Range, and has to use all his knowledge, experience, ingenuity and luck to keep himself and the widow and the stock alive through the worst of winter on record. There’s a bit of skulduggery going on and The Doughroaster deals with it in his own unique and entertaining way.
Bullock Creek is an adventure story about a rapidly disappearing lifestyle, written in the vivid style that distinguishes Barry Crump’s writing, and which has been enjoyed by hundreds of thousands of readers, both here and abroad.