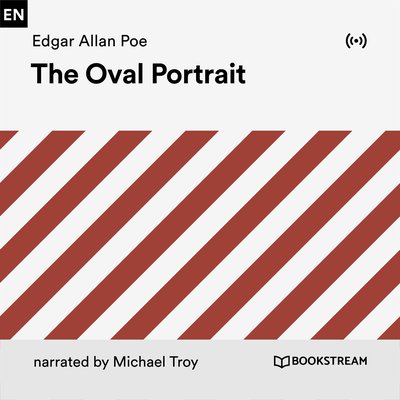 "The Oval Portrait" is a short story by Edgar Allan Poe involving the disturbing circumstances surrounding a portrait in a chateau. It is one of his shortest stories, filling only two pages in its initial publication in 1842.

The tale begins with an injured narrator (the story offers no further explanation of his or her impairment) seeking refuge in an abandoned mansion in the Apennines. The narrator spends his or her time admiring the paintings that decorate the strangely shaped room and perusing a volume, found upon a pillow, that describes them.

Upon moving the candle closer to the book, the narrator immediately discovers a before-unnoticed painting depicting the head and shoulders of a young girl. The picture inexplicably enthralls the narrator "for an hour perhaps". After steady reflection, he or she realizes that the painting's "absolute life-likeliness' of expression is the captivating feature. The narrator eagerly consults the book for an explanation of the picture. The remainder of the story henceforth is a quote from this book—a story within a story.

The book describes a tragic story involving a young maiden of "the rarest beauty". She loved and wedded an eccentric painter who cared more about his work than anything else in the world, including his wife. The painter eventually asked his wife to sit for him, and she obediently consented, sitting "meekly for many weeks" in his turret chamber. The painter worked so diligently at his task that he did not recognize his wife's fading health, as she, being a loving wife, continually "smiled on and still on, uncomplainingly". As the painter neared the end of his work, he let no one enter the turret chamber and rarely took his eyes off the canvas, even to watch his wife. After "many weeks had passed," he finally finished his work. As he looked on the completed image, however, he felt appalled, as he exclaimed, "This is indeed Life itself!" Thereafter, he turned suddenly to regard his bride and discovered that she had died.