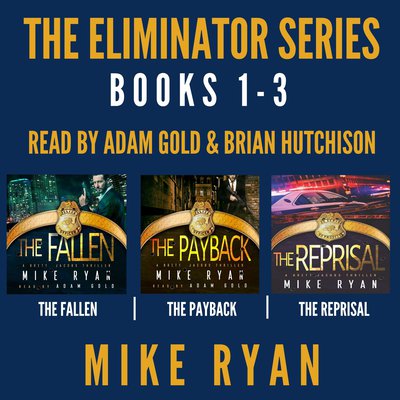 Get the first three books in The Eliminator Series:

Detective Brett Jacobs is a good cop. But he's soon going to have his limits tested. After he arrests a major crime boss, he’ll find out just how dirty the bad guys play. Jacobs realizes that in order to beat an organization like this, he has to fight fire with fire. Will he throw his badge away to become a one man wrecking crew? Or will he try to work within the confines of the law? One thing’s for certain, the men he’s going up against have severely underestimated the lengths that he’ll go to. And he’ll stop at nothing in order to extract his revenge.

Rich Mallette is in prison, but he’s still calling the shots. Brett Jacobs may have taken out some of his men, but he’s not ready to throw in the towel just yet. He’s still got a few things up his sleeve for the former detective, one of which is another heinous act aimed to destroy what’s left of Jacobs’ soul. While Jacobs battles more of Mallette’s Maulers, he learns the identity of the second man who was with Frazier when his family was killed. It will culminate in Jacobs and Mallette finally meeting face to face for the first time since Mallette ordered the hit on Jacobs’ family.

Frustrated that his organization is crumbling while he’s in prison, Mallette starts getting desperate. He orders the kidnapping of the kids of Jacobs’ brother. Fearful that the kids might end up like the rest of his family, Jacobs frantically searches the city to find them before they end up in the cemetery. With time growing short, and Jacobs knowing that his enemy is willing to do the unthinkable, Jacobs enlists the help of unlikely allies in order to find them before it’s too late. Will Jacobs find the kids in time? Or will Jacobs get there too late and cause his pain and suffering to go to even lower proportions.