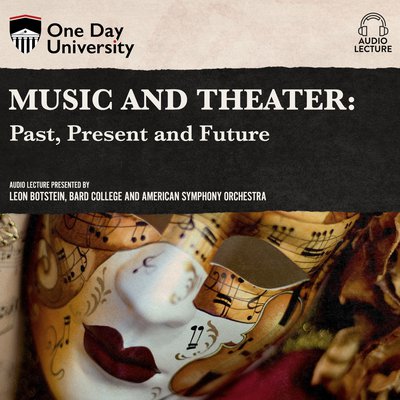 One Day University presents a series of audio lectures recorded in real-time from some of the top minds in the United States. Given by award-winning professors and experts in their field, these recorded lectures dive deep into the worlds of religion, government, literature, and social justice.Music is so important because it has no purpose. Its only utility is to remind each of us as human beings about the power of our own imagination. Music matters because it is so completely a human invention. But not a useful one—its only purpose is existential and ethical. It reminds us of what we are capable of; that each of us brings something a little bit different to the experience. An experience that can only strengthen our respect for the dignity and lives of others. As the musicologist and pianist Charles Rosen so eloquently put it, The death of classical music is perhaps its oldest continuing tradition. Critics often blame the business (It's a charity case! Ticket sales will never account for all of its costs!) and the culture (Why all the abstruse rules of conduct? Why can't I wear shorts?) without having a clear grasp on either. Such moments of mockery go back at least as far as the Marx Brothers' A Night at the Opera. Classical music was for pretentious snobs in 1935, according to the movies; classical music is for pretentious snobs in 2014, according to television. In between, Americans built Lincoln Center and the Walt Disney Concert Hall; penned hundreds of memorable works, and sold millions of classical records.