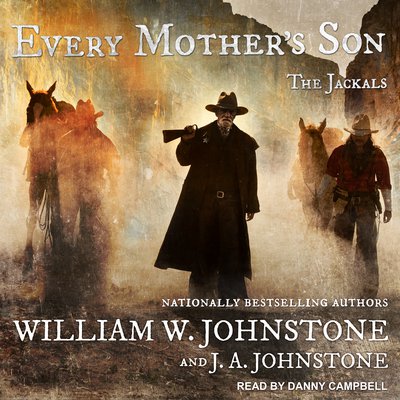 Three men of honor. One impossible mission. No turning back. The Jackals ride again—in the Johnstones' gunblazing chronicle of the wild and lawless West . . .

In Texas's Big Bend country, every man has a price. For crime lord Harry Holland and his ruthless gang of cutthroats, that price is $20,000—a ransom demand for the kidnapped daughter of a retired Army colonel. So far, neither the Army, the Rangers, nor bounty hunters have been able to penetrate Holland's guarded fortress. In desperation, the colonel turns to the Jackals. As a longtime friend, retired cavalry sergeant Sean Keegan is determined to bring the man's daughter back alive—with or without the ransom money—but first he needs to convince his partners, former Texas Ranger Matt McCulloch and bounty hunter Jed Breen. This is no ordinary job. There's a very good chance it's suicide . . .

When word gets out that the Jackals are on the case, all hell breaks loose. They're up against trigger-happy mercenaries, marauding Apaches, and one final, jaw-dropping surprise—a kidnapping victim who doesn't want to be rescued. This time, the Jackals have no one to save . . . but themselves.