Philosophy Between the Lines 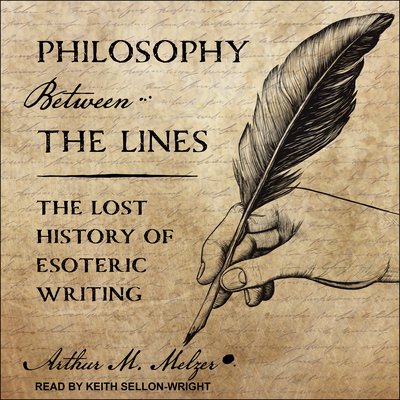 Philosophy Between the Lines

The Lost History of Esoteric Writing

Philosophical esotericsim-the practice of communicating one's unorthodox thoughts "between the lines"-was a common practice until the end of the eighteenth century. The famous Encyclopédie of Diderot, for instance, not only discusses this practice in over twenty different articles, but admits to employing it itself. The history of Western thought contains hundreds of such statements by major philosophers testifying to the use of esoteric writing in their own work or others'. Despite this long and well-documented history, however, esotericism is often dismissed today as a rare occurrence. But by ignoring esotericism, we risk cutting ourselves off from a full understanding of Western philosophical thought.

Arthur M. Melzer serves as our deeply knowledgeable guide in this engaging history of philosophical esotericism. Walking listeners through both an ancient (Plato) and a modern (Machiavelli) esoteric work, he explains what esotericism is-and is not. Melzer explores the various motives that led thinkers in different times and places to engage in this strange practice, while also exploring the motives that lead more recent thinkers not only to dislike and avoid this practice but to deny its very existence. In the book's final section, Melzer turns to how we might once again cultivate the long-forgotten art of reading esoteric works.