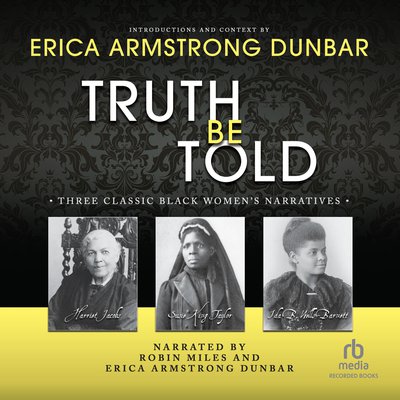 “The war of my life had begun; and though one of God’s most powerless creatures, I resolved never to be conquered.”—Harriet Jacobs From Harriet Jacobs’ experience as a fugitive, to Susie King Taylor’s life as a nurse and teacher for the Union Army, to the powerful life of journalist and activist Ida B. Wells-Barnett, Black women have always stood at the center of the fight for freedom and progress. All three were born enslaved, yet each found the courage and grit to push back against societal norms to fight for or simply take their freedom. Truth Be Told comprises three powerful narratives written by formerly enslaved women who lived long past emancipation. Each narrative offers a window into time and moves the listener along chronologically from the early years of a new nation, through the Civil War, and up through the perilous years of Reconstruction. Award-winning author and historian Erica Armstrong Dunbar provides an accessible and engaging introduction and afterword for each narrative, tying these figures’ lives to the arc of Black history and illuminating connections to the current global social justice movement that focuses on Black life. The afterword for Harriet Jacobs’ Incidents in the Life of a Slave Girl focuses on sexual violence, escape, being hunted, and looking for safety in the United States. For Susie King Taylor’s Reminiscences of My Life in Camp with the 33d United States Colored Troops: Late 1st S. C. Volunteers, the conclusion focuses on women and military service, war, Confederate monuments, and federal occupation. Finally, the afterword for Ida B. Wells-Barnett’s Southern Horrors: Lynch Law in All Its Phases focuses on the rise of racial violence and the murder of Black men, women, and children at the hands of citizens and law enforcement. This compilation serves as the ultimate collection of classic narratives written by three Black women social justice advocates who provided gripping testimony about their experiences in order to remind their nineteenth-century readers that Black lives mattered.