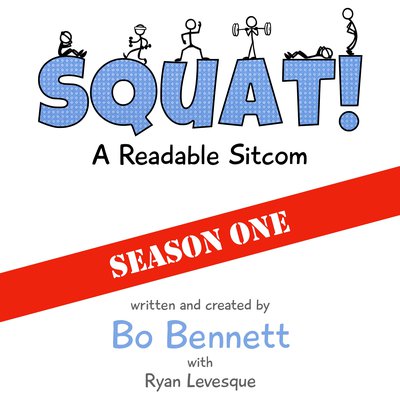 With the help of a freakishly wise janitor, a newly-hired membership director struggles to keep a fitness center afloat while being given ridiculous tasks from an ethically-questionable owner.

Take an opinionated and all-around diverse group of fitness trainers, add a sketchy owner, a genius janitor, and throw in an endearing but largely incompetent general manager, and you have the perfect recipe for riotous, chaotic hilarity. You have Squat!

Set in a large fitness center in the Boston suburbs, the sitcom follows Scott Carter, a former big-shot marketing executive who takes a job at Squat Spot Fitness out of desperation. Carter quickly discovers that the place is run by an ethically-questionable owner willing to exploit staff and clients alike, and a general manager who's in way over his head. With the help of a bright fitness director and a freakishly wise janitor, Carter manages to keep the gym open... for at least a bit longer.

Squat! features an interesting cast of characters who embody many of the social and political issues of the day. Rather than address these issues directly, they remain lightly veiled within seemingly petty arguments and conflicts. Each episode offers viewers the anticipation and fun of discovering the parallel "real world" political and social issues highlighted. Without taking sides, Squat! invites viewers to laugh at the absurdity of humanity while deepening understanding of those with differing beliefs.

The series presents an additional running theme of owner Jack Pemberton's dubious assignment to Scott Carter. Carter struggles to satisfy his boss without compromising his values.

Squat! offers humor--of the smart, subtle, and laugh-out-loud varieties--along with lovable, fallible characters, and even an insight or two about creativity, understanding, and ethics.

The first season comprises ten fully-scripted episodes, rewritten as a comedic novel. Season One innocuously and hilariously provides a nod to such topics as COVID / mask-wearing, claims of election fraud, QAnon conspiracy theories, pronouns, "Karens," defunding the police, multi-level marketing scams, cults, and even truth itself.