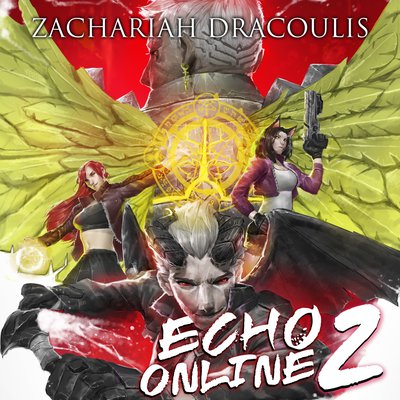 BRAAAAAAAAAAAAAAWP!
This is the harrowing sound that came with the Hallowed Kings' devastating attack.
However, in their haste to scorch Buck's allies, they forced hundreds of players onto the safe haven of Alcatraz to happily join the Damned Legion.
As if there wasn’t enough on Buck’s plate, what with him and his girlfriends suddenly running one of the biggest clans in Echo, the steady rise of in-game conflict has begun to spill out into the real world, both in his work and relationship as old faces come back into the picture seemingly just to complicate things.
Join Buck, Jane, and Sam as they take the helm of their newly massive guild, plot their revenge against the Hallowed Kings, and figure out what they’re going to do about their real world woes.

Delve deeper into the sex-fueled, fun-filled, and possibly nightmare-inducing world of Echo Online in this, the second entry of the Echo Online trilogy.

Not to mention, more Dave, and not just because he threatened to start cutting people if he wasn’t mentioned at least once.