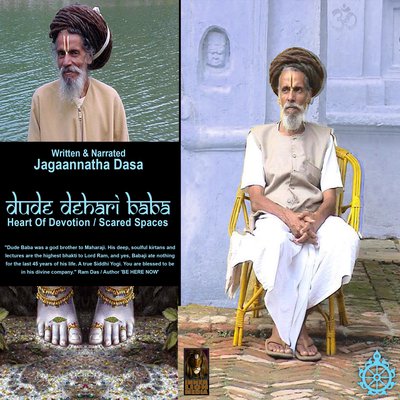 "When a man has reached the point where he can sit in meditation for six months there is no need of eating, No need of latrine or of rest. Only one drop of amrit nectar from the top of the head to the body keeps him alive." Dude Baba, SRI Lockport, 1993

"Dude Baba was a dear friend and god brother to Maharaji. His deep, soulful kirtans and lectures are the highest bhakti, or devotion to Lord Ram, and yes, Babaji ate nothing for the last forty-five years of his life. A true Siddhi Yogi. You are blessed to be in his divine company." Baba Ram Das / Author 'BE HERE NOW'

Ram Krishna Das Vaishnaba, or Dude Dehari Baba, or Milk Baba was so named because he lived forty-five years entirely on one small cup of milk per day. No other food ever passed his lips. Baba lived in a small room by the Bagmati river at Pashiputinath temple, five kilometers outside of Katmandu. His beautiful matted hair, or jata, was over twenty-six feet long. Baba was a lifelong devotee of Lord Rama and God Brother and confidant of Neem Karoli Baba, the iconic guru of Baba Ram Das.

Lord Rama, also known as Ramachandra, is the seventh avatar of Krishna, one of his most popular incarnations along with Parshurama, and Gautama Buddha. Rama was born to Kaushalya and Dasharatha in Ayodhya, the ruler of the Kingdom of Kosala.

Dude Baba was always chanting the name of Rama and was a master musician and great singer of bhajans. In 1993 he met American devotee author Jagannatha Dasa and subsequently travelled to his farm community in Lockport, New York for a six-month residency at the SRI ashram there.

While there Dasa arranged for Baba to begin a mammoth two week recording session with a host of popular Indian musicians in order to get his collected bhajans down on tape for posterity. Recorded too were several inspirational lectures. Here then is the fruit of a lifetime spent as an ardent servant of Lord Rama and liberating transcendental vibrations of a pure devotee.