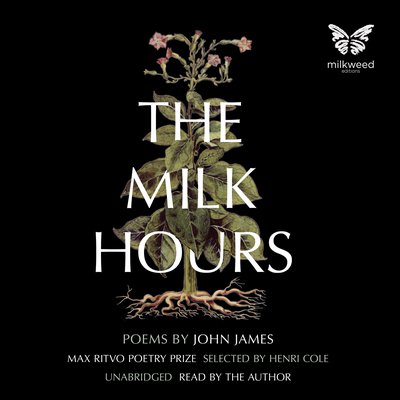 Winner of the Max Ritvo Poetry Prize, The Milk Hours is an elegant debut that searches widely to ask what it means to exist in a state of loss.

“We lived overlooking the walls overlooking the cemetery.” So begins the title poem of this collection, whose recursive temporality is filled with living, grieving things, punctuated by an unseen world of roots, bodies, and concealed histories. Like a cemetery, too, The Milk Hours sets unlikely neighbors alongside each other: Hegel and Murakami, Melville and the Persian astronomer al-Sufi, enacting a transhistorical poetics even as it brims with intimacy. These are poems of frequent swerves and transformations, which never stray far from an engagement with science, geography, art, and aesthetics, nor from the dream logic that motivates their incessant investigations.

PRAISE FOR THE MILK HOURS

“An unflinching observer, John James writes with a patient honesty and a lyric beauty that will leave you ringing.”

“Luminous . . . Out of the sorrowful fragments of personal history, John James has a created a book of unusual intelligence and beauty.”

“John James does as that first singer did, Caedmon, who sang because he was told he must do so—a song of praise, of animals and life, of land and blood and time. Such work is wholly personal and completely anonymous, embedded in the very life and limb whose limits it also astonishingly resists.”—DAN BEACHY-QUICK