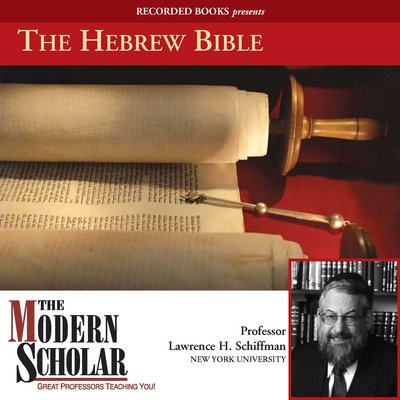 The Hebrew Bible, known to Jews as the Tanakh and to Christians as the Old Testament, is the basis for the West's tradition of monotheism, as well as our civilization's ethics and mores. In this course delivered by Professor Lawrence H. Schiffman, listeners will engage in a discussion on how that collection came into being and how it was passed down and interpreted throughout the ages. By the conclusion of the discussion, you'll see how this tradition developed into the basis of Judaism and Christianity and how it continues to mold our society and culture today. The Jewish Bible was collected in ancient Israel over a long period of time. The first books of the Bible are the Five Books of Moses, in Hebrew, the Torah, or by its Greek name, the Pentateuch, meaning "five books." For the Hebrew Scriptures, the Biblical canon was divided into three parts, Torah, Nevi'im, and Ketuvim. Christians have a completely different term for this Jewish canon that constitutes about one half of the Christian Bible. Because Christians have an additional set of texts, namely, the Gospels and the Epistles, Christians refer to the earlier material as the Old Testament in contradistinction to the New Testament. This intellectually satisfying course examines the complex issues of the historicity of the biblical account as well as the deep theological and religious ideas that the Bible teaches. We will sample approaches both traditional and modern, making use of the works of a broad sampling of scholars - ancient, medieval, and modern - to understand the message of the Hebrew Scriptures and the stories they told. Archaeology and the perspectives gained from our knowledge of the Ancient Near East will be at the forefront, allowing us to approach the Bible with the help of the manifold tools of modern research while retaining respect for the Bible and its ancient message.